On Saturday 27 April 2019 I traced the route of the former Dublin & Blessington Steam Tramway. This line, effectively a roadside railway, ran 20¼ miles from Terenure in south west Dublin to Blessington and Poulaphouca in County Wicklow.

Approximately following the present-day N81 road, the single-track railway served locations such as Tallaght, Brittas and Ballymore Eustace, as it ascended the western side of the Wicklow Mountains. The section to Blessington opened in August 1888, with a further 5-mile extension to Poulaphouca Bridge been completed in May 1895. The construction of this latter section was overseen by a separate company, the Blessington & Poulaphouca Steam Tramway, but for all intent and purposes, was operated and managed by the parent company. Passenger services were operated by steam locomotives hauling tramcar trailers, with the goods traffic conveyed in a modest fleet of wagons. 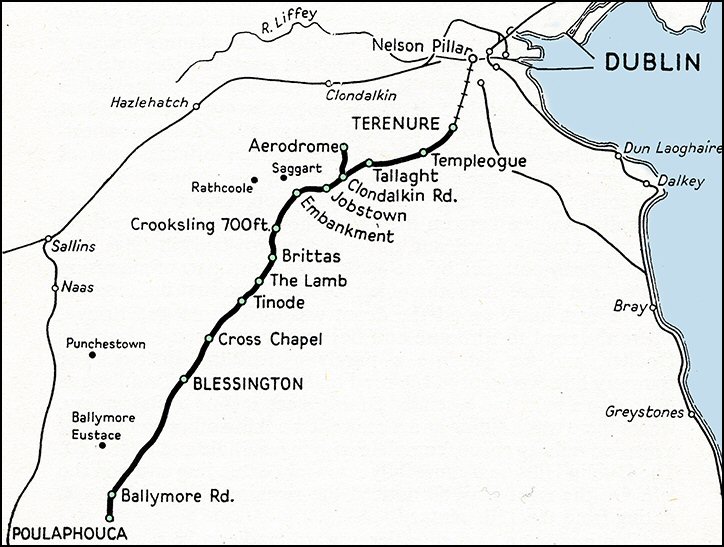 Serving sparsely populated areas and relying on agricultural traffic, the tramway never achieved a prosperous life. Following the Great War, the tramway was adversely affected by bus and lorry competition, while the condition of its own rolling stock gradually deteriorated due to the company’s financial constraints. In its final years, cost-effective petrol-engined railcars were operated alongside the steam fleet, but this ultimately did not save the tramway, which closed on 1 January 1933, the section between Blessington and Poulaphouca having shut five years earlier in September 1927.

Although closed 87 years ago and almost lost from living memory, there are visible remnants of the Blessington Tramway still in existence, as the following photo-feature illustrates. These are complemented by images from the archives of the Irish Railway Record Society and highlight some of the locations on the old line.

A poem about the Blessington line was written by the late Barry Tynan O’Mahony, the last few lines of which appeared in 1953 in the Sunday Press, and ran as follows:

“But yet I have a feeling, when the world’s come to an end, That the steam tram will come stealing like an old and trusted friend, When we’re standing round in billions trying to get across the Styx, And the cars are lined in millions, and we’re really in a fix, When the buses cannot shift on, and the traffic’s all a jam, Perhaps we’ll get a lift on . . . THE OLD-STEAM-TRAM.”

This archive photo-feature has been compiled by Ciarán Cooney, Hon Photographic Archivist of the Irish Railway Record Society’s library and archives at Heuston Station, Dublin. Further images from the Society’s collection can be found on the IRRS’s Photographic Archive. IRRS Membership can be obtained online via the Membership Page.