The 40km stretch of disused railway line between the towns of Mullingar and Athlone, formerly the Midland Great Western Railway’s Dublin-Galway mainline, was redeveloped into the Old Rail Trail greenway in October 2015. On Sunday 6 June 2021, I traced the route of the line, visiting four of the stations at Newbrook, Castletown, Streamstown and Moate, nine years after I had photographed them in their then overgrown condition in 2012. The railway was originally opened by the MGWR in 1851 as a double-track mainline. It was converted to single-line in May 1929 by the Great Southern Railways, with intermediate passing loops retained at Castletown, Streamstown, Moate and the 73rd-Milebox. 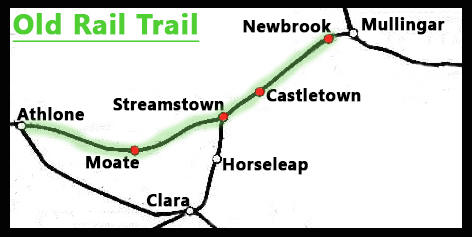 Most of the Galway and western line services ceased operating over the route after April 1973, leaving a skeleton service mainly consisting of night mail trains. The last scheduled passenger and freight trains ran over the route in 1987. However, it remained in use for excursion trains and diverted services until 1995. Engineering trains also operated over the line on an infrequent basis until approximately 2003, with the last rail-movement occurring in 2006.

This archive photo-feature has been compiled by Ciarán Cooney, Hon Photographic Archivist of the Irish Railway Record Society’s library and archives at Heuston Station, Dublin. Further images from the Society’s collection can be found on the IRRS’s Photographic Archive. IRRS Membership can be obtained online via the Membership Page.